A few weeks ago I found an enormous scrapbook on a stall at my local flea market. It didn’t look hugely inspiring from the cover – it was completely plain and very battered – but my love of vintage scrapbooks meant that I was immediately interested. 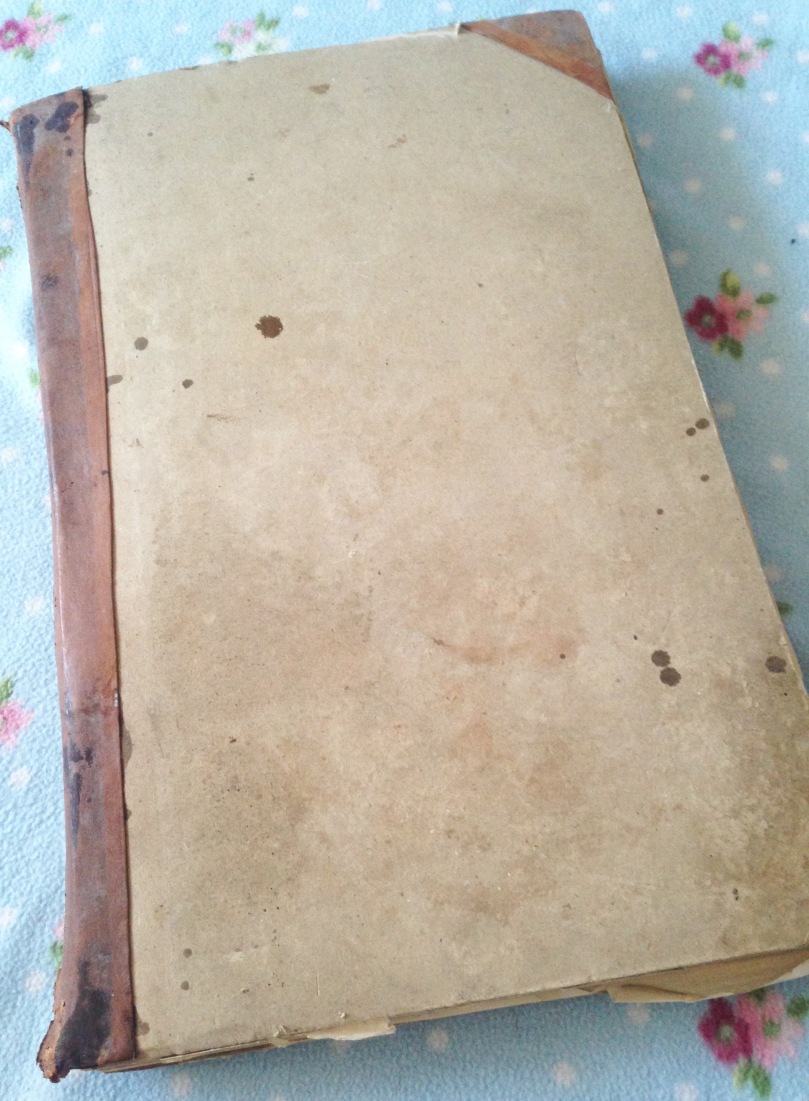 The book was about 50cm or so in size – certainly not the sort of book you would be able to sit on your bookshelf! As I opened the book and flicked through I could see that the book had been a real labour of love for someone.

I already own a few old scrapbooks, and they often seem to contain pictures and newspaper clippings along a similar theme.

These were all there, in the huge scrapbook on the market stall. I noticed a few newspaper articles dated 1934 and 1935… then a page from a calender, also dated 1935. As I didn’t have a scrapbook compiled in the 1930s I decided to hand over my £10 and take the huge, battered scrapbook home with me. I like how we can learn so much about an era from these home-made works of art… We get an insight into what was going on in the world at the time the book was compiled and also what was important to the creator of the book.

I love the work that went into these books. In an age of no television and relatively unsophisticated toys, books, pens, paper and an imagination played a huge role in keeping our young ancestors entertained. I wonder what the motivation was behind these scrapbooks. Were they just a way for young girls (and, I assume – boys) to occupy themselves? Were they specifically to preserve memories? Was the child passionate about it and constantly searching for pictures and newspaper clippings to paste into the book or was it a slightly drab activity to help pass a rainy day?

Of course, what the creators of these wonderful scrapbooks didn’t realise was that one day – many years in the future – their book would fall into the hands of someone completely unconnected to them, in an altogether different world, living a life that would be impossible for the scrapbook creator to ever imagine.

So, I got the big scrapbook home and started looking through the thick, pasted pages. So many beautiful, vibrant colour illustrations… I’m guessing they were from magazines. Lots of black and white pictures of animals, all carefully cut from magazines and newspapers. A four page newspaper feature on the 1935 Silver Jubilee of King George V, as well as many more photographs of the jubilee and the Royal Family. 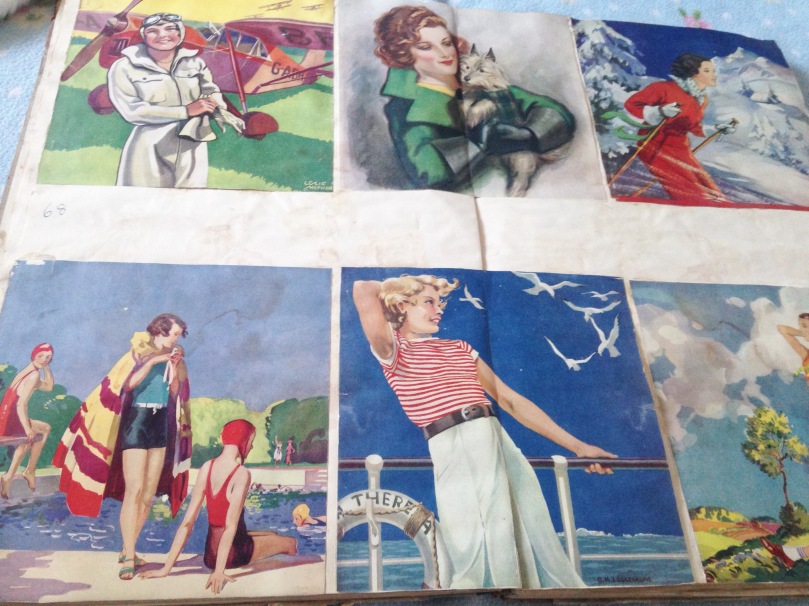 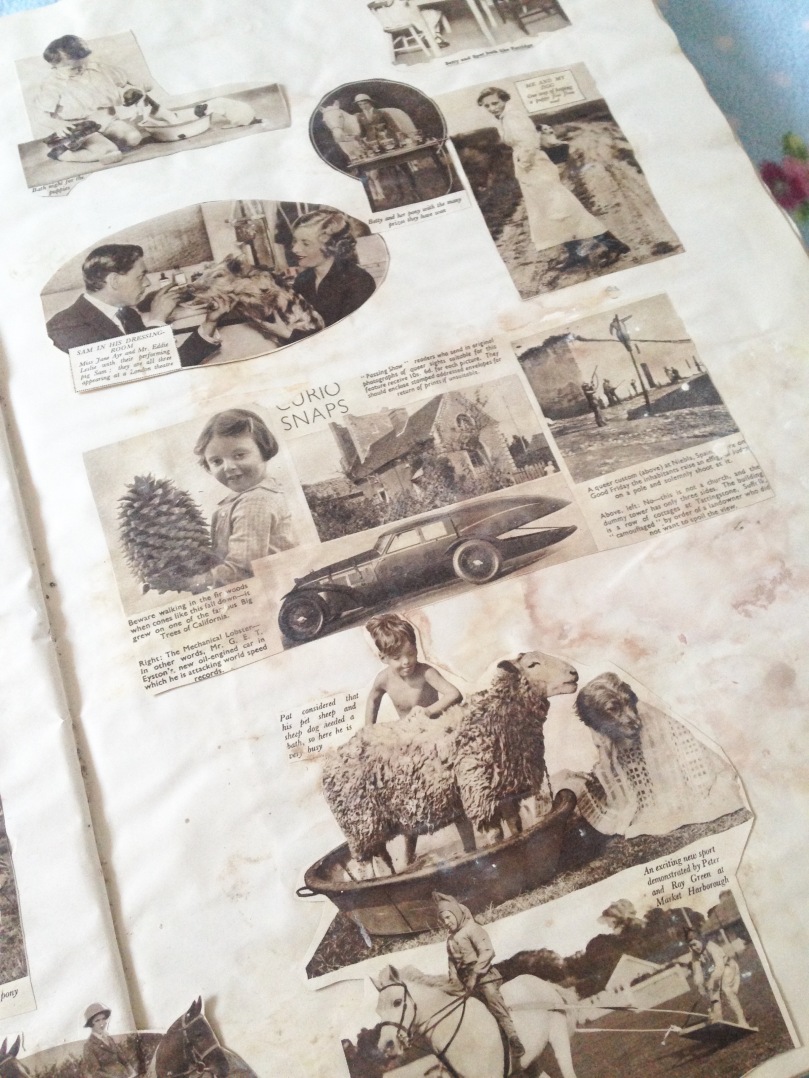 A postcard that had come loose from one of the pages was addressed to ‘Dearest Rosamund’, from her aunt. There were a few other mentions of the name Rosamund in the book and on various scraps of paper and cards, so I feel fairly sure that it was Rosamund who compiled the scrapbook.

Then, as I was looking through the large pages and carefully separating some that had become sealed together over the last 80 years, I came across some pretty, hand drawn pictures. They had been coloured with what looked like pencil crayon and filled several pages. In-between the pages, loose, were two typed pieces of paper. 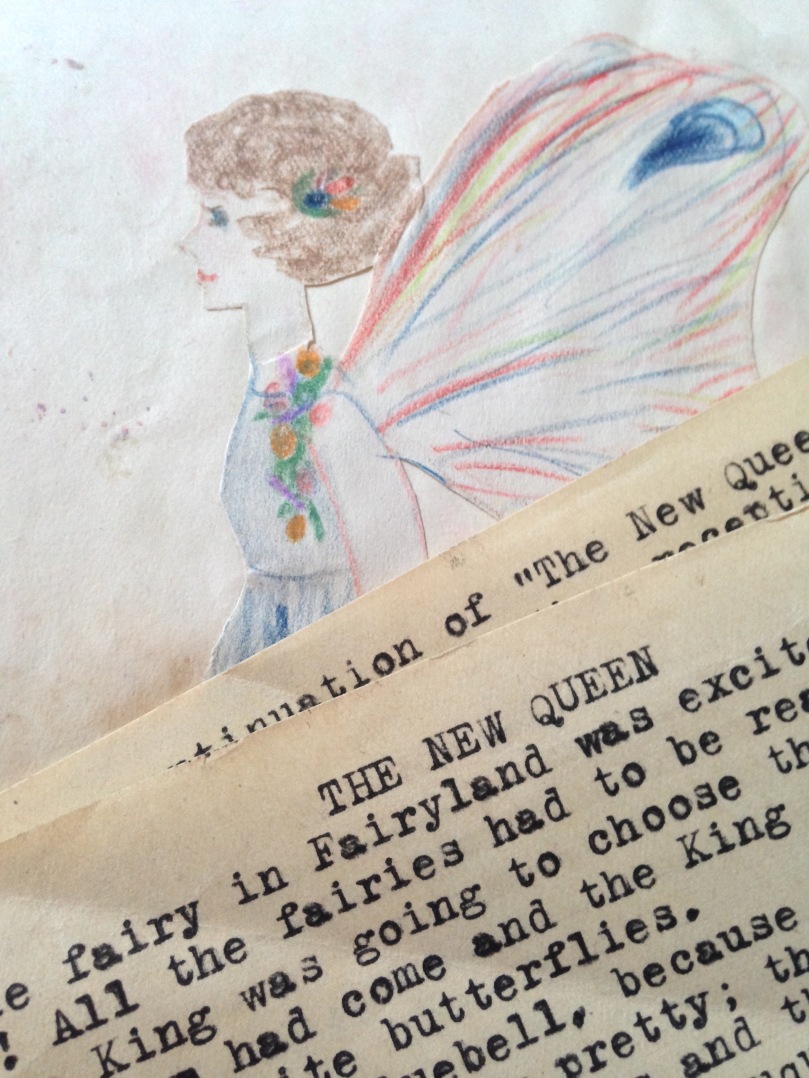 The drawings were all of fairies. Beautifully drawn and coloured with such care, these fairies had all been given a name and a little description of their character. It was as I studied these pretty pencil drawings and read the magical fairy descriptions that I realised that this scrapbook was incredibly special. Here, in the depths of the newspaper pasted pages was the imaginary world of Rosamund in 1935. A world of fairies, pixies and enchanted creatures, captured on paper for me to discover eighty years later. I hope you enjoy the illustrations that follow. Unfortunately, the paper is rather discoloured with age and there are quite a few marks around the drawings. However, I don’t think this takes anything away from their magic… It is perhaps not simply the illustrations that are beautiful but the absolutely wonderful imagination behind them. Some are drawn directly onto the page and others have been carefully cut and glued to the page. I suspect one or two had been traced from an adult’s drawing (mother? father?) and it is curious how the style of drawing varies between the illustrations. Perhaps some were drawn by friends… I will never know, but I am fascinated by them… 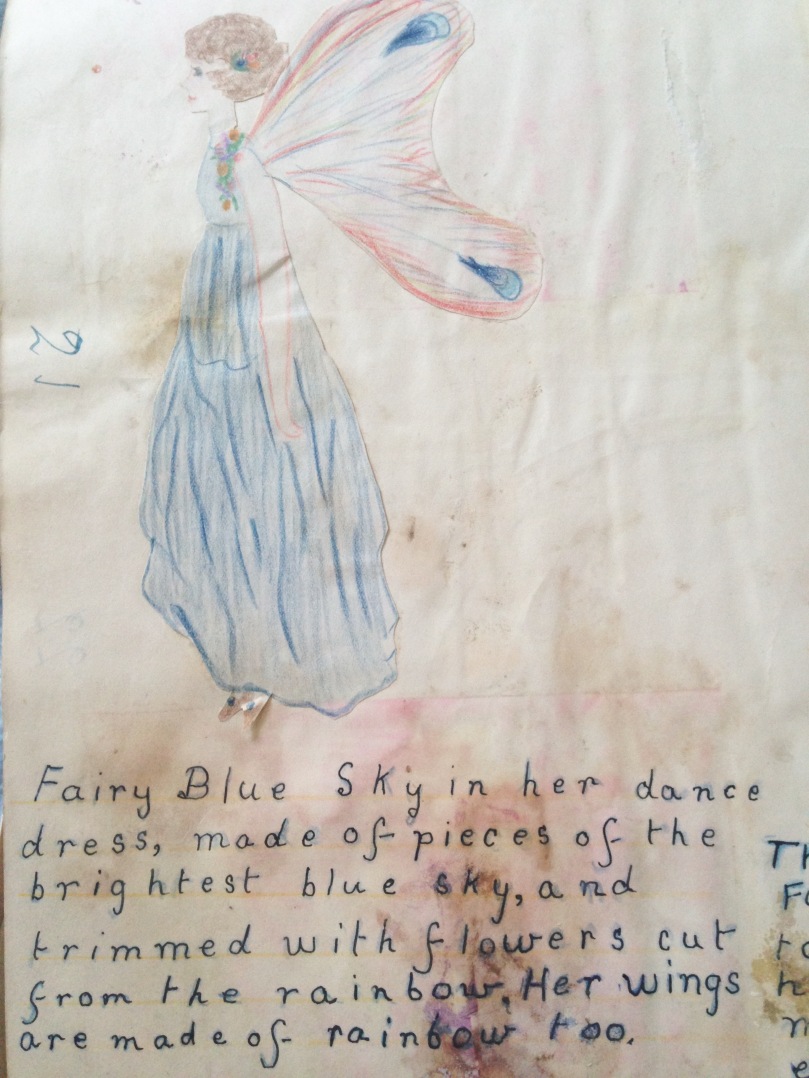 “Fairy Blue Sky in her dance dress, made of pieces of the brightest blue sky, and trimmed with flowers cut from the rainbow. Her wings are made of rainbow too.” 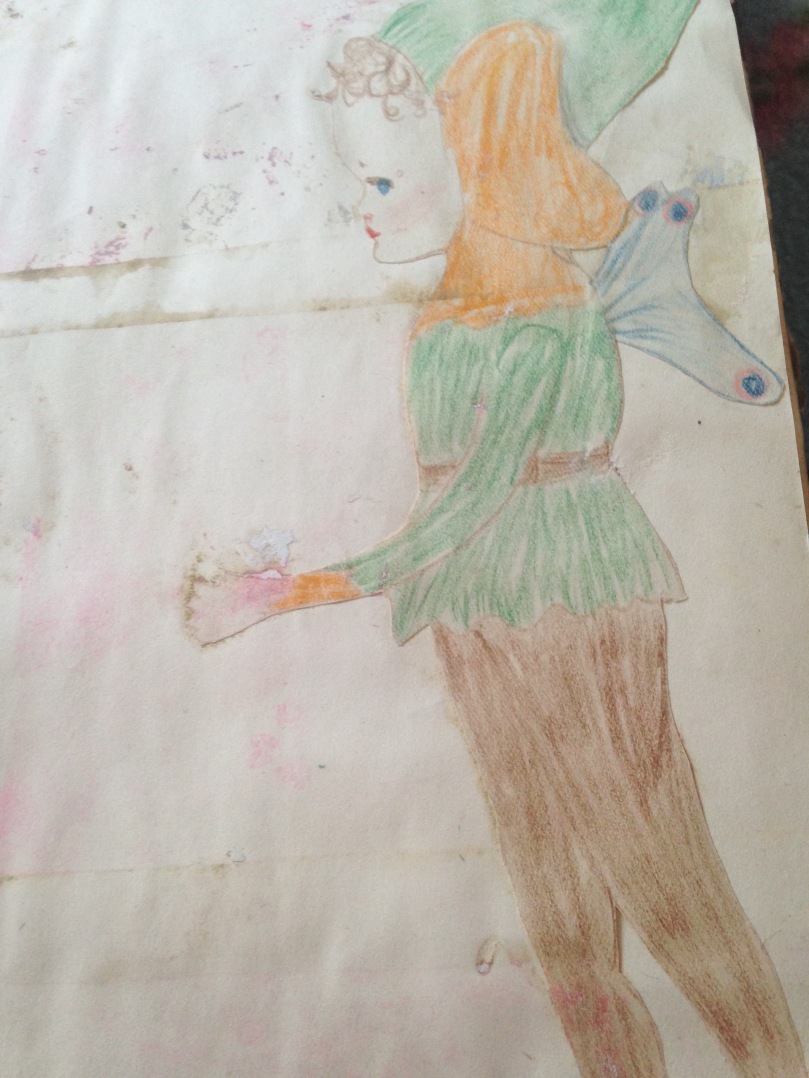 Pixie Pookins: This dear little fellow looks after all the toy animals, and feeds them at night when all is quiet.” 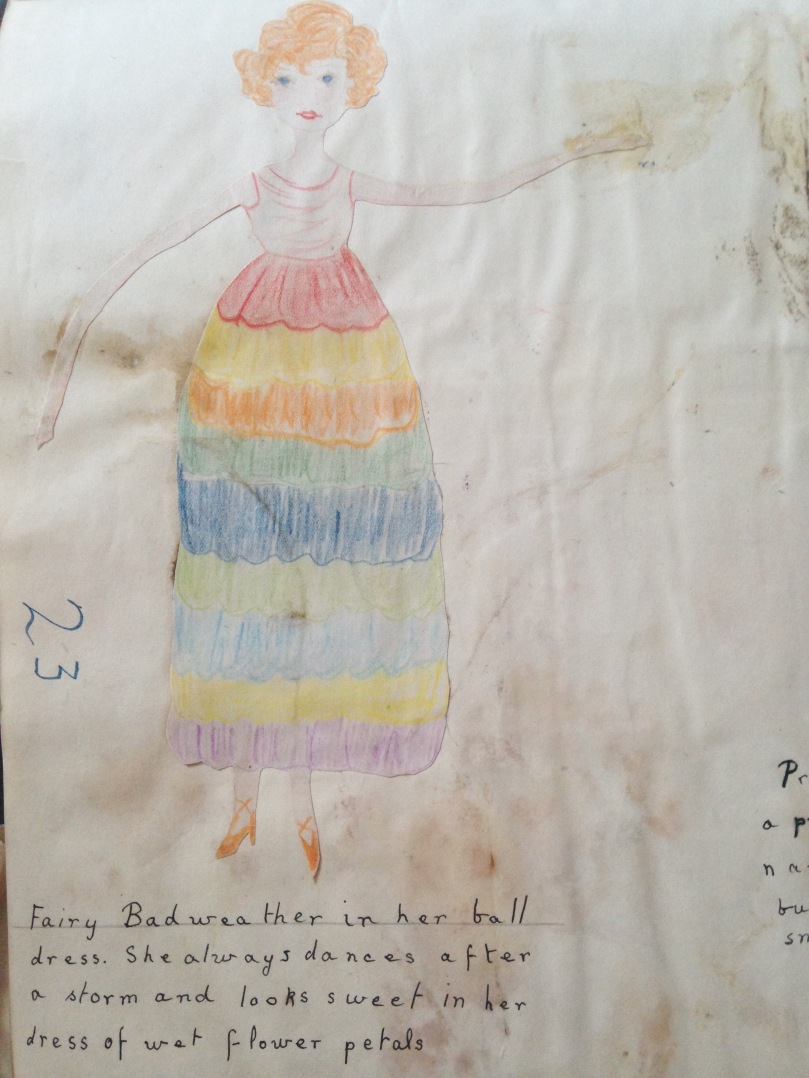 “Fairy Bad Weather in her ball dress.  She always dances after a storm and looks sweet in her dress of wet flower petals” 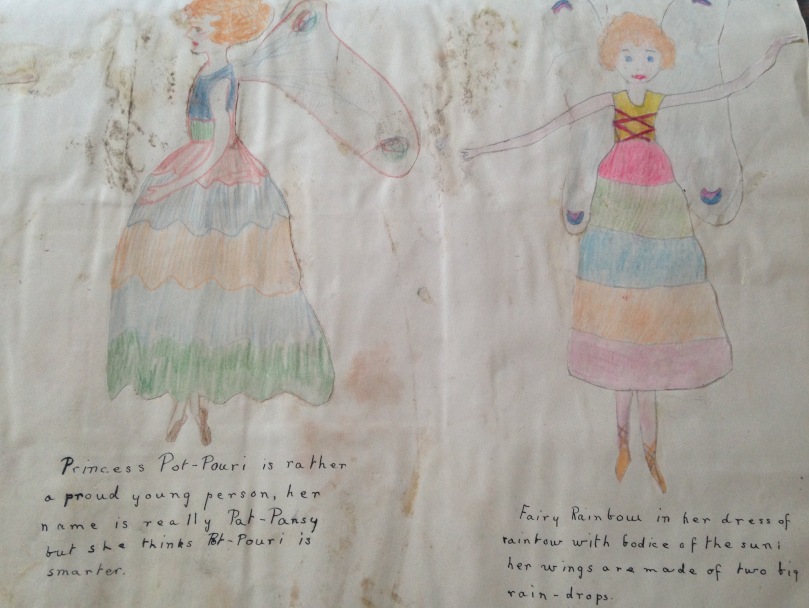 “Fairy Rainbow in her dress of rainbow with bodice of the sun. Her wings are made of two big raindrops” 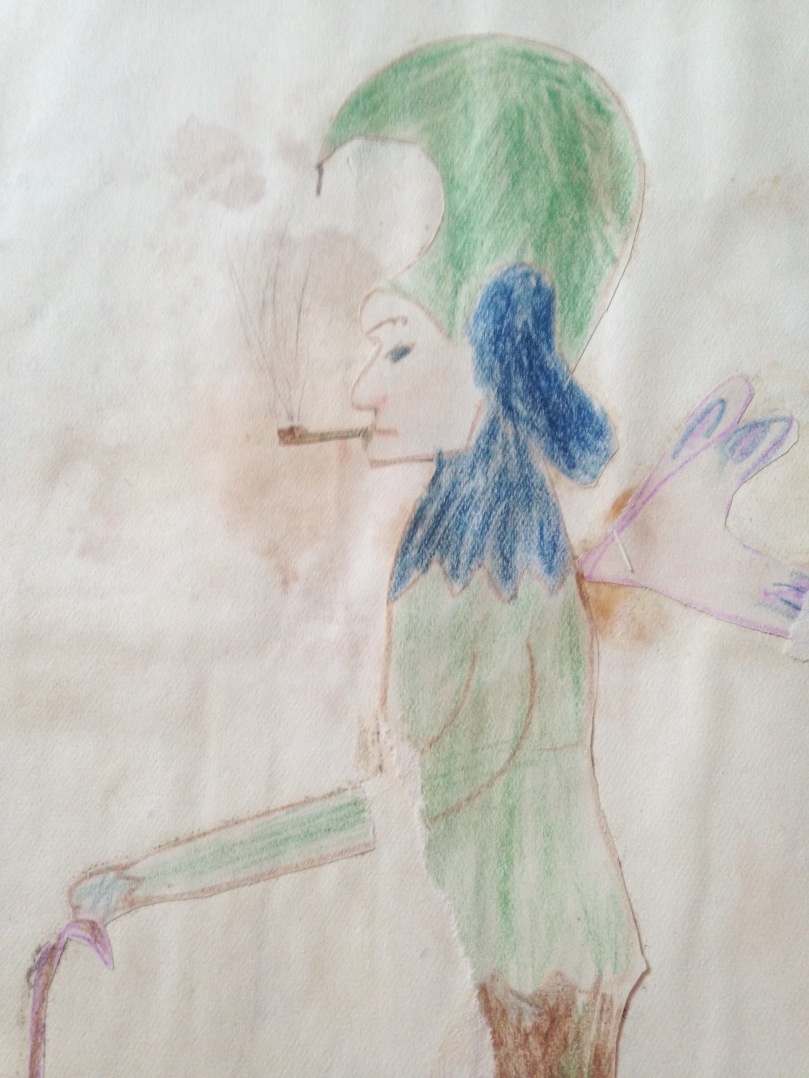 “Dear old Daddy pixie, he smokes an acorn pipe and is very kind and gives all the good pixie boys big pieces of dew cake when mummy isn’t watching” 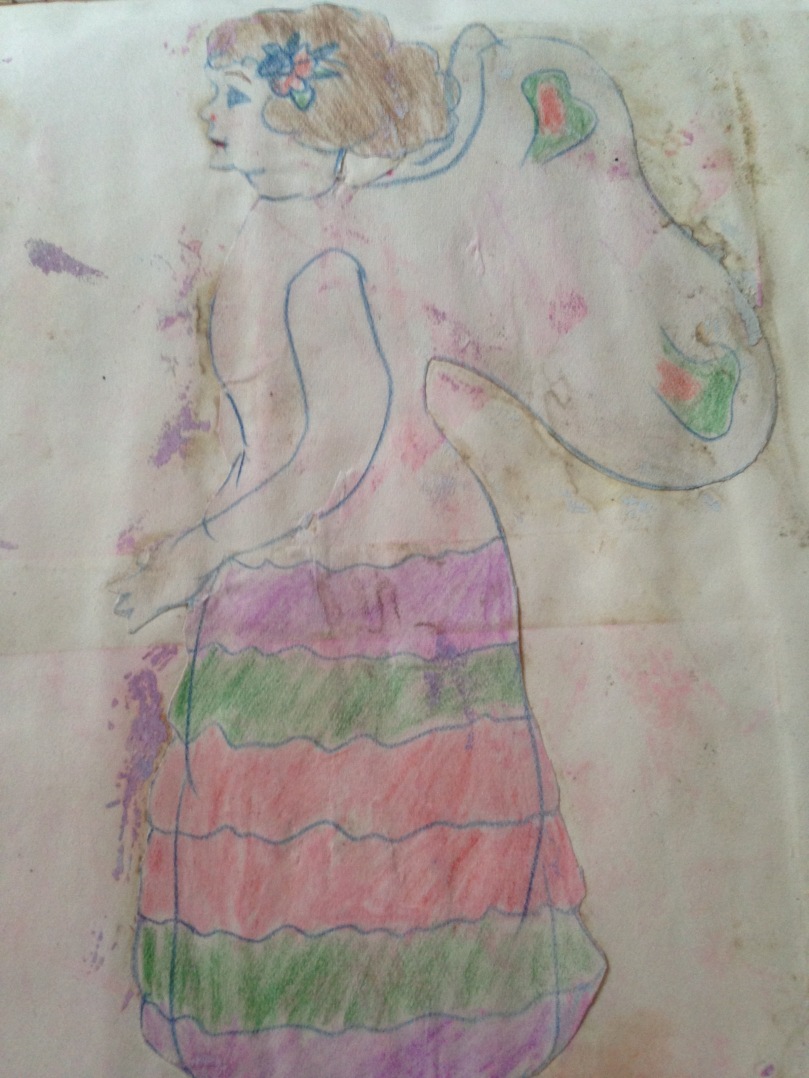 “This is dear fat Mummy fairy, she mends all the cut torn dresses, wings, knees and shoes and gives medicines to the fairies who eat too much honey pie” 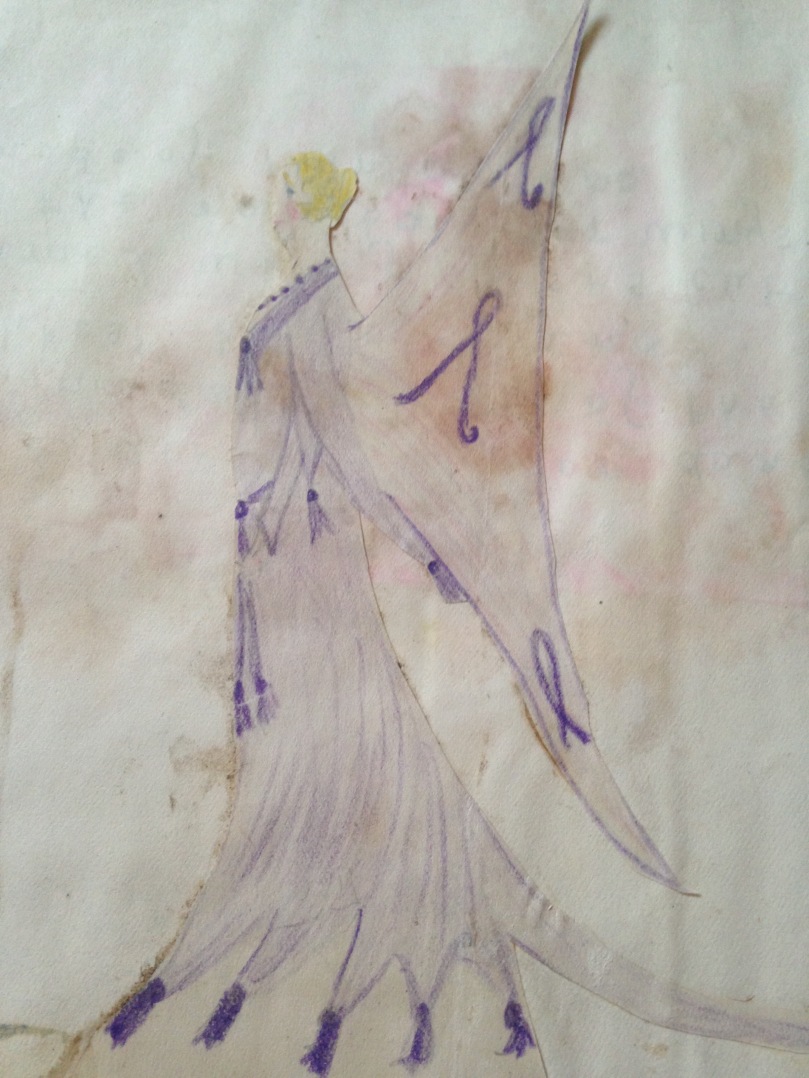 “Her favourite flower is the deadly nightshade – purple and yellow. She always wears purple and her hair is gold. Her wings are made of fairy gossamer dipped in the purple dye of the rainbow. Her name is Pansy.” 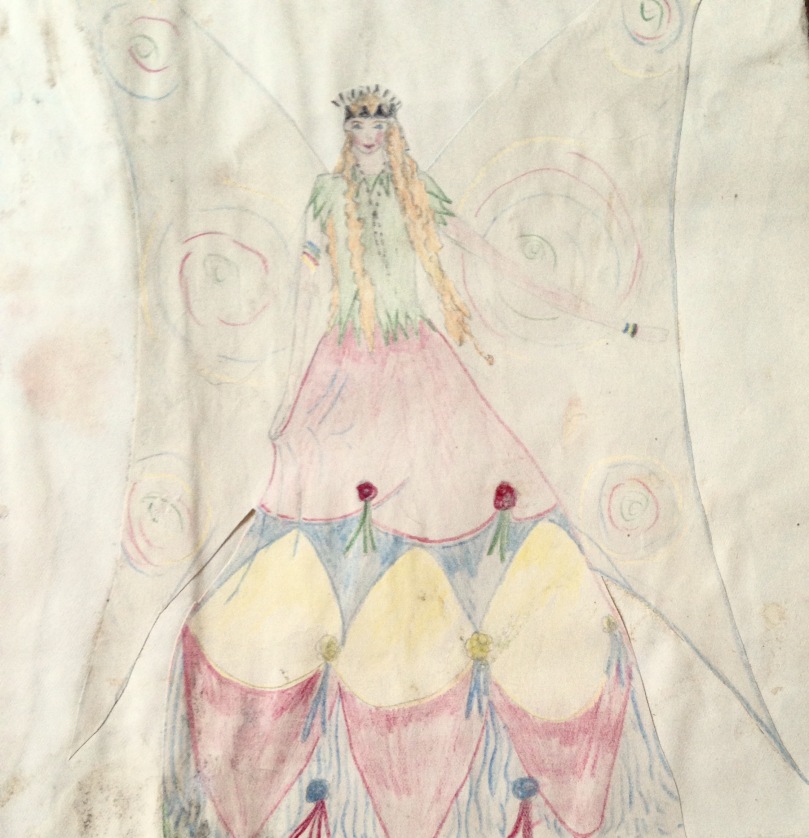 “Her bodice is made of sepals. Her first frill is made of rose leaves, her second of bluebells, her third of primroses, her fourth of poppies and her last of asters. Her wings are made of gossamer with all the tints of the flowers.”

What I adore about these descriptions is how many flowers are featured. Would a young girl today know what sepals, deadly nightshade or asters are?

The descriptions are so magical and convey so much imagination. What a wonderful little world Rosamund created!

At some point, Rosamund was given access to a typewriter to type out her magical fairy stories. She also wrote a little story about a naughty frog called Samuel John Snubnose. There is a drawing of him too, in a smart little jacket and cap. 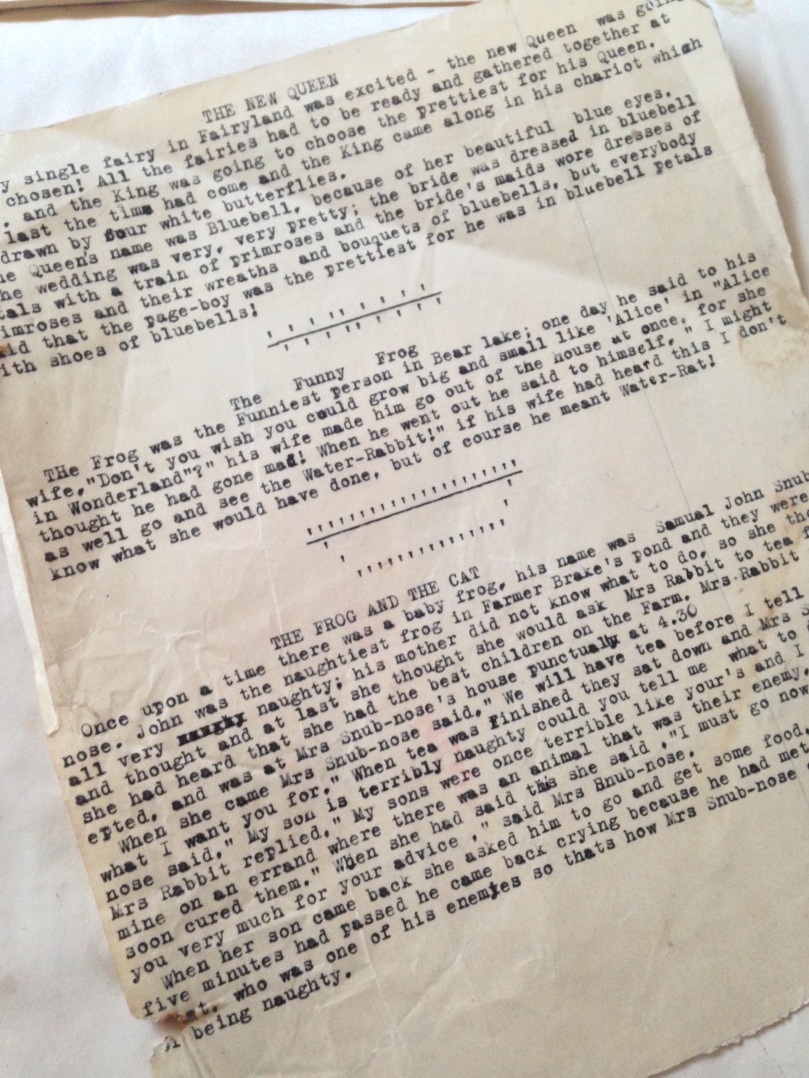 Here is Rosamund’s typed story, The New Queen, followed by a sequel on the next page entitled The Reception.

“Every single fairy in Fairyland was excited – the new queen was going to be chosen! All the fairies had to be ready and gathered together at 6.00 and the king was going to choose the prettiest for his queen.

At last the time had come and the king came along in his chariot which was drawn by four white butterflies.

The Queen’s name was Bluebell, because of her beautiful blue eyes.

When the wedding was over everybody went to the reception; first the king and queen sat on a huge toadstool while all the other fairies and gnomes danced round them and then they had tea off another toadstool, bigger than the first. They ate cakes with honey from the flowers and drank dew out of acorn cups.

Then they went back to the other toadstool and the king and queen got on again and then the queen said, “I will give a little prize to the fairy or gnome that does the best things!” Then one little fairy said she would dance. As she danced her clothes shone in the moonlight and she looked beautiful. When she stopped an old gnome came out and said “I will play the violin for your majesty” and he went to a hollow oak and brought out the most beautiful and most tiny violin you ever saw. It was made of very fine wood and its strings were of cobwebs and the bow was a rose stalk and cobweb. When he played everyone heard the most wonderful music. Then the queen said, “you are both so good I don’t know who to give the prize to so I shall have a party and you will be my guests of honour the next moonlight night.” ” 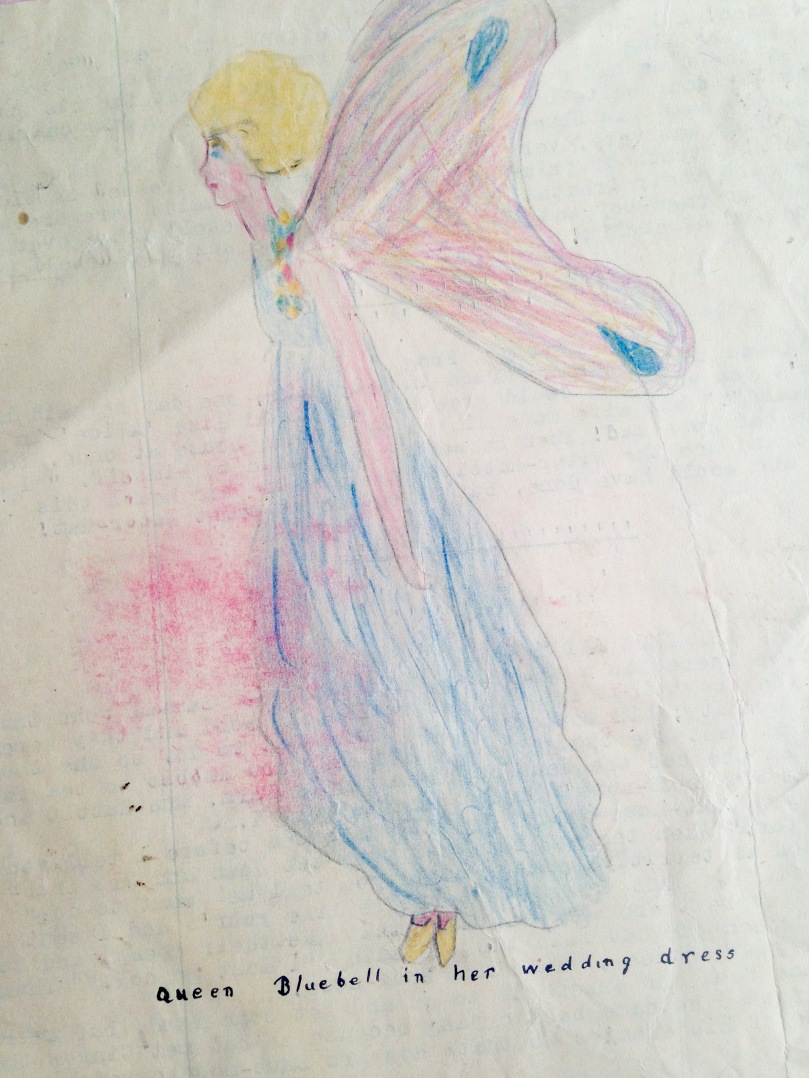 What a very beautiful imagination Rosamund had. Her sweet and ethereal descriptions of the fairies and their world are so perfect you almost feel that perhaps Rosamund really did have fairies at the bottom of her garden! How wonderful to have such magic in your head and your heart.

I wonder if Rosamund carried these thoughts and stories in her mind throughout her life. If she had children, did she tell her children these magical little stories?  Did anybody else in the world ever see these pictures or hear her stories?

Whatever would Rosamund think to know that I have just shared her fairy world, 80 years later? I wish I could tell her how special I think her stories and drawings were, how I love ‘dear old daddy pixie’ and his acorn pipe and how wonderful I find the idea of a tiny violin with cobweb strings.

I’ll never know any more about Rosamund, her life or read any more of her fairy stories. But I am so very glad I found that big, old scrapbook and was able to peek into her enchanting world of fairies, gnomes and pixies, hidden amongst all the 1935 newspaper and magazine clippings.

Thank you for reading x

You can visit my etsy shop here