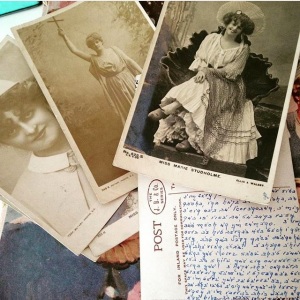 Back in April I was stood looking through old postcards on a stall at my local market.  I have always loved old postcards and I had bought quite a few in the past, mainly cute illustrations by Agnes Richardson and Mabel Lucie Attwell as well as a few from the First World War era. The seller was offering me a 3 for 2 deal (regular customer perks!) and I was quickly flicking through the box to find my third card. I picked one of a glamorous Edwardian actress. It wasn’t what I would usually choose – the era looked earlier than the time periods I’m typically drawn to and I hadn’t heard of the actress in the picture. However I hadn’t seen another that I especially liked and I wasn’t about to lose out on a free third card. Off I rushed back to the car with my market buys, looking forward as I always do to closely examining everything I’ve just bought.

I was quite surprised when I went to read the Edwardian postcard of the actress that it was a message made up entirely of numbers and symbols. It was dated 1905 and addressed to a Miss Storey-Bates at a vicarage in Haslingden, Lancashire.

Why on earth would a seemingly innocent postcard be written in a complex code?

From that one postcard, so began a sudden and obsessive interest in Edwardian postcards and in Miss Storey-Bates and her mysterious, code-writing friend. I also learned a great deal about cracking codes and being patient and persistent! I hope you enjoy reading what I learned about this card. And would you believe it – I was lucky enough to find more coded cards addressed to Miss Storey-Bates! More about that later!

Firstly, a very brief look at the moment in postcard history that the card was sent.

Pictorial postcards were introduced in England in 1894 but the picture was essentially the back of the card with a small margin where the sender may just manage to squeeze a few words. The front was for the address only. The price to send one of these cards was half a penny, half the cost of a sealed letter. The cards were a great way to send a picture of a landmark or scene to someone but that was pretty much it. In 1902, the post office granted permission to printers to produce the split-back postcard that is what exists to this day – one half of the card could be used for a message and the other was to be used for the address. The all new pictorial postcard was a huge success, sparking off an outright craze and a whopping 6 billion postcards were sent within the UK between 1902 and 1910. Suddenly communication was easy – in some areas there were six mail deliveries a day, so it was easily possible to have a conversation via postcard just within the course of one day. Send a card in the morning for it to be received in the afternoon… These postcards were the texts and facebook messages of their day. Not only did they make communication simple and fast but they also became highly collectable. The craze meant that postcard albums became hugely popular and people delighted in filling these albums with attractive cards. Masses of designs of cards were printed with beautiful actresses from the stage and music halls being particularly popular. Miss Madge Lessing, Miss Gabriella Ray, Miss Mabel Love… these were among the popular actresses who’s photographs graced the fronts of postcards. One of the most popular actresses to grace the Edwardian picture postcard was the actress Miss Marie Studholme. It was Marie Studholme who was smiling out from the rather mysterious postcard I had found.

So, back to that postcard.

A postcard of a popular actress, posted in February 1905 to a ‘Miss’ at a vicarage – why did the writer of the card feel the need to make the message covert?

Well, the problem with postcards was of course their very ‘open’ nature. Essentially the message contained within a postcard was public. Many postcards of the era make reference to following up with a letter later – clearly the postcard didn’t altogether replace the letter but it was an additional quick, easy, cheap and ‘light hearted’ way to convey a message.  But what if you didn’t like the public nature of the picture postcard? After all, the postmaster might want something to read as he’s doing his rounds. And when the card lands in your home through the letterbox, what if father reads it or you find your younger brother and his friends giggling at a postcard conversation you may be having with someone? If the message was personal and the writer wished it to be seen only by the intended recipient then a shared code between sender and recipient was the answer. I’m not sure how commonly coded postcards were sent, but I have seen them mentioned a number of times while researching the history of the Edwardian postcard.

So, perhaps the postcard in my hand wasn’t completely unusual.  But  that didn’t mean it lost any of its intrigue. I absolutely had to know what had been kept secret from the Haslingden postmaster and the rest of the Storey-Bates family at the vicarage. I had to crack that code!

So, to start with I stared at it rather a lot. A string of numbers, apostrophes and scientific looking symbols. I tried obvious things like seeing if the numbers corresponded to the alphabet in sequence. I literally had no idea how on earth I would crack such a code and I felt pretty frustrated that I was locked out of message contained within this neatly written postcard. Code cracking isn’t really a skill you need to use that often.

I kept staring at it. I started thinking about our language… single letters are most frequentky ‘I’ or ‘a’. Words tend to end with consonants. Second letters are frequently vowels. These observations did help – eventually – but not in the initial cracking of the code. Then, when I’d all about given up on it, I showed it to a ‘fresh’ pair of eyes. I asked my friend to have a look. So she stared at it too. Then she queried something specific about some of the numbers. Some had apostrophes and some didn’t. She reasoned that perhaps the apostrophe meant that that number was a vowel? Literally the second she suggested that I began once more writing streams of letters with numbers. The numbers that were marked with an apostrophe were always between 1-5. Progress at last!

After that, it was many hours of trial and error of substituting different letters for numbers and characters. I began to build a message. Finally, I was allowed ‘in’ on this 110 year old message. I hoped Miss Storey-Bates wouldn’t mind. Here is what the message says:

I hope you may be able to get another hundred of Marie. Are you playing golf today? I’m glad I saw you last night, if it was only for a minute I can always do my work better when I have seen you. I forgot to ask you last night if you were invited to the Woodcocks?

After I had de-coded the postcard I felt slightly puzzled as to why something so innocent would need to be encrypted? Was it for privacy or simply for fun? It wasn’t quite the lust laden message I had hoped for. However, it was a nice message… a kind message.  And it was one of several kind, gentle and loving messages that I found – encrypted – on Marie Studholme postcards the following week in the same old box of postcards at the market. I discovered that the writer was Ralph Duckworth and Miss Storey-Bates was named Minnie.

I can’t tell you how happy I was when I found that other handful of cards sent from Ralph to Minnie throughout 1905-06. One card had been written in a different code, but fortunately it was very easy to crack (a simple shift of letters of the alphabet). The others thankfully followed the same code as the first card. It is quite a special feeling to unlock a message that has more than likely been hidden for 100 years, rather like being given a key to open a door to the past. It felt pretty magical as the words slowly appeared on my notepad and the message was revealed.

I will share more of Ralph and Minnie’s postcards in a later blog post. You may also be interested to hear that through  a bit of research, I discovered that Ralph and Minnie married in 1913.

I wonder if Minnie ever did get 100 cards of Marie Studholme. If she did, I desperately want to find them.

Thanks for reading x

3 thoughts on “The Secret Code Of Ralph And Minnie”